This kit is designed for children ages 6 to 12 years and has 248 pieces and is compatible with other Lego building block toys at BBB for Kids.

Lookout! Gray has become lost n his Gyro sphere and is being chased by a Dilophosaurus. Use the binoculars to seek out the ferocious animal and call for back-up on the walkie-talkie. Help the ACU trooper to rescue Gray in the Jurassic world 4 x 4. Search for the raging dinosaur and call for backup with the walkie-talkie. Stop the dinosaur by using the winch to grab the dinosaur’s legs or by activating the explode function before it can jump on the back of the 4 x 4.

Relive the adventures from the movie or create your own adventures using just your imagination. Great building set to add to your LEGO® collect. Click here and order today!

Here is a great video from our friends at Artifex Creations on the LEGO® Jurassic World Dilophosaurus Ambush Review : LEGO® #75916. ENJOY!

This kit is designed for children ages 6 to 12 years and has 174 pieces and is compatible with other Lego building block toys at BBB for Kids.

Lego’s Jurassic world Pteranodon Capture Building Kit brings the adventure of a flying dinosaur right into your playroom. A Pteranodon has flown away after seizing an asset containment unit (ACU) in its claws. You need to rush into the cockpit of the cool Jurassic One helicopter, with pilot Simon my Marrani, who is the billionaire backer behind the project. The helicopter has an opening side door to reach the platform and hang out to fire the net shooter. Chase the dinosaur and capture it, with the net shooter, before it can get away.

Re-create all the adventure of the movie, or set out on your own adventures limited only by your own creativity. You will have many hours of inventive fund with this building Kit. Check out the current offers Today!

This building set is designed for children ages 7 to 12 years and has 520 pieces and is compatible with other LEGO®  building block toys at BBB for Kids.

The Jurassic world T Rex tracker building Kit is the ideal kit for re-creating the recapture of the T Rex, which has escaped.

You will meet Hoskins for the first time. He is the head of InGen’s Private Security division and race along in the T Rex tracker with an ACU trooper and its harpoon style trap shooter. Your child can also drive the motorcycle that will distract the T Rex while avoiding the creature’s powerful jaws. Meanwhile, make sure they put out the dino-cage as a trap and prepare to fire the mobile research modules trap shooter. You’ve only got one shot to capture this huge dinosaur, so make it count.

Create your own adventures and add any parts from your other Lego building sets to make it as exciting as your imagination can conceive.

One Raptor has escaped and you need to use the hide speed off road vehicle to capture it and get it back to its pen. Things could not get any worse- the second has caused the vet to fall into its pen. You must rush back to prevent the vet from becoming lunch for hungry dinosaur. .  You can fire the flick shooter or use Barry’s tranquilizer gun to tame the Raptor.

Have hours of creative fun reliving the adventures of the movie or create your own adventures. This set is compatible with other LEGO®  sets so you can build the biggest adventure possible.

Check out the special offers!

The Jurassic World Indominus Rex building Kit contains 1156 pieces and is designed for children from 7 to 12 years of age at BBB for Kids.

Watch out! The genetically enhanced  Indominus Rex is the most dangerous dinosaur in the park and has broken out of the impound.  Zack, is in his gyro sphere, launched from the pen wall is now in danger. Direct the hunt for the rampaging beast from the impound research tower. Search for the wild beast using the helicopter and direct it back to the pen before anyone is hurt or any serious damage is caused. Try to avoid the dinosaurs snapping jaws and reaching claws.

When the Indominus Rex is in the compound you can feed it with the feeding crane and conduct research in the tower. Your child can also launch the gyro sphere from the impound wall as well as activate the dinosaur pen’s breakout function.  Hurry and buy today!

You can re-create all the exciting adventures from the movie or you can use your imagination to create many different adventures. You can mix this kit with other kits and sets from LEGO® to make many truly exciting experiences. You will have many hours of creative fun with this kit. 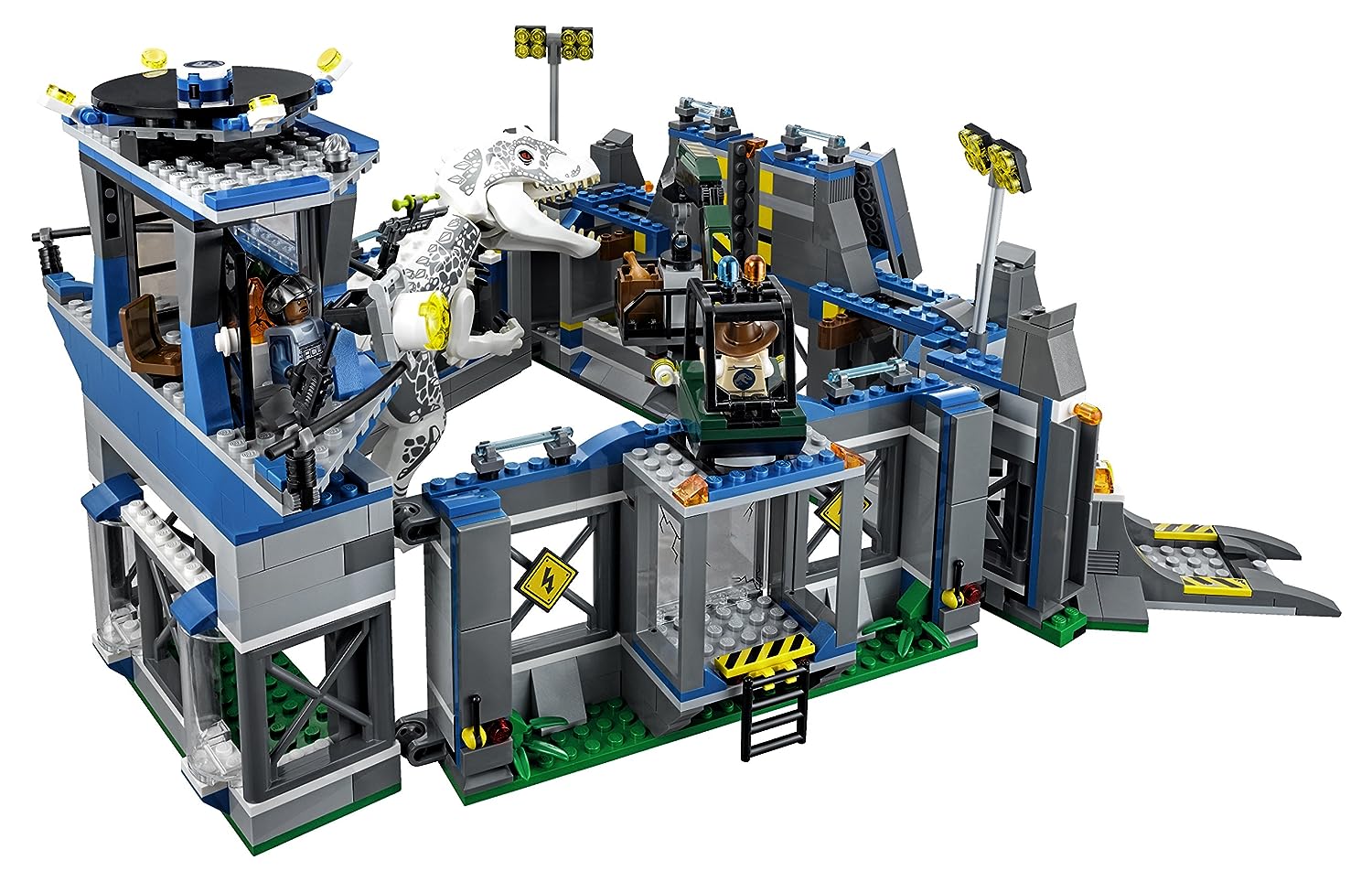 This set is designed for children ages 6 to 12 years and has 324 pieces and is compatible with other Lego building block toys at BBB for Kids.

Your child can fend off raptor attacks on the mobile vet unit that is under attack from Blue and Delta, two of the four main raptors (Delta, Blue, Charlie and Echo) in the movie. They can pretend to drive the mobile research unit at top speed and repel the raptors with the rotating rooftop shooter.  Click here to get a great price on this TODAY!

Owen who works at a behavioral facility on the outskirts of the island and trains and studies these very special Raptor pack will try and distract the dinosaurs by riding his motorbike and holding a flare while you fire the tranquilizer gun to bring down the beasts.  Giving the Asset Containment Units, or (ACUs), who are highly-trained professionals a chance to shoot their tranquilizer gun to put the animals to sleep.

You can also use your imagination and creativity to create your own thrilling Jurassic world action scenes.

Watch this video review from Janbricks because he goes into great detail when reviewing a product. So here is  LEGO® Jurassic World Indominus Rex Breakout review! set #75917. ENJOY! 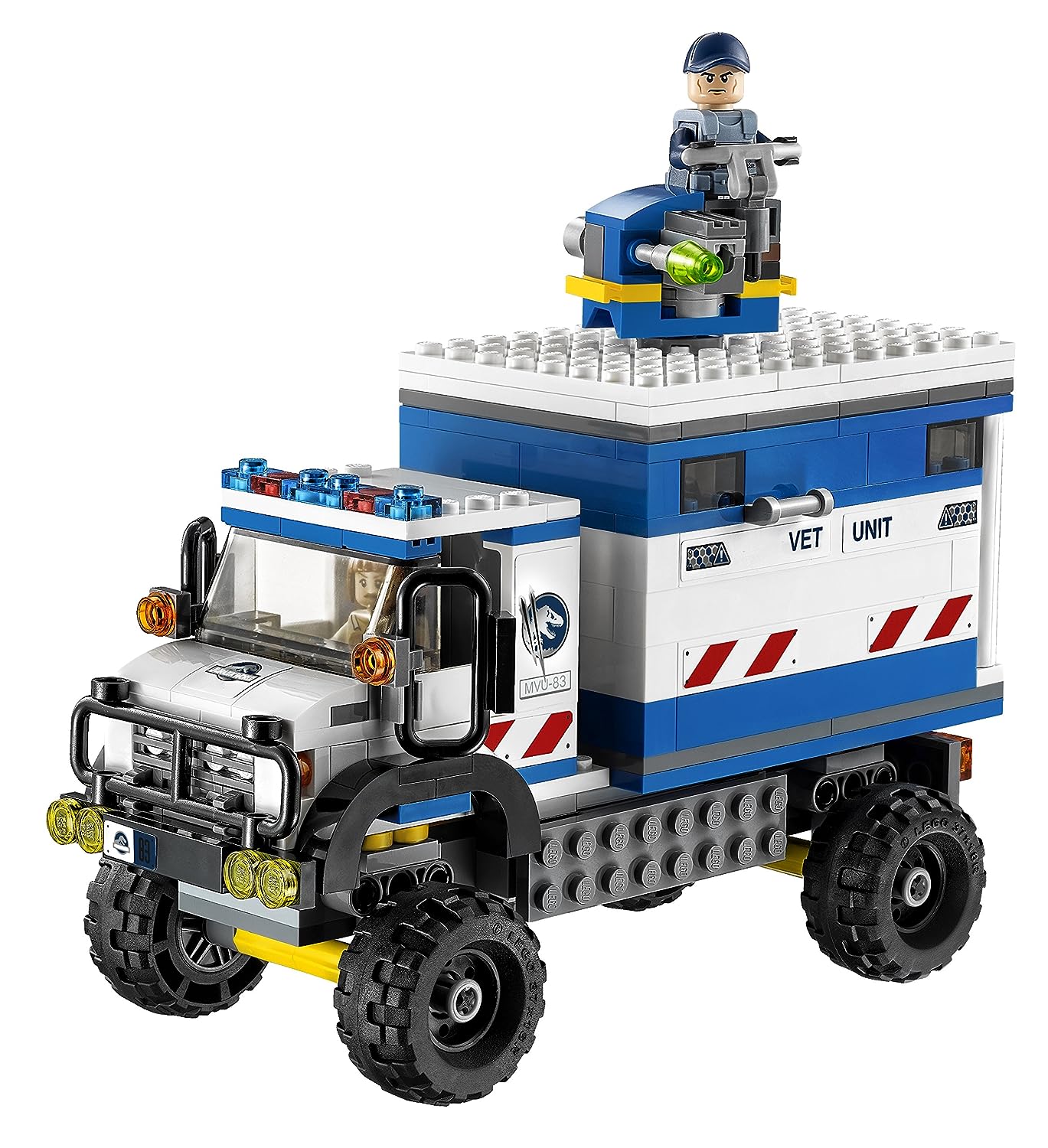 Welcome to BBB for Kids

Our Posts  will not only complement our super store opening soon but will be a combination of some history about building blocks, how they have changed through the generation from simple wooden items to the sophisticated ones of today; like in the  Mindstorm and Lego Technic . They are also finding a home in theme based sets of movies and games such as Disney’s  Frozen, Star Wars, Lord of the Rings , and video games like Minecraft.

We will also discuss how these simple toys have been used not only for play but in education for the young and as a rehabilitative tool for all ages.

And of course, doing reviews on the latest building sets and comparing them with others as for quality and interest.

As always…unlock  your child’s creativity and imagination in something the whole family can enjoy for generations.

We welcome you to join our quarterly newsletter and mailing list for updates to our posts and new items we have found. Of course, we welcome new topics of interest, comments or if you have found something you would like us to speak about in the next newsletter.

until we meet again…
Barb & Walt

My blog about building blocks for kids

X
The owner of this website is a participant in the Amazon Services LLC Associates Program, an affiliate advertising program designed to provide a means for sites to earn advertising fees by advertising and linking to Amazon properties including, but not limited to, amazon.com, endless.com, myhabit.com, smallparts.com, or amazonwireless.com.
Skip to toolbar